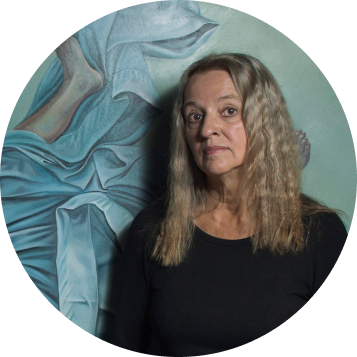 She created the visual graphics for the book Ontogonias with poet Alexis Naranjo, published by Imprenta Mariscal. She has contributed to numerous publications in Ecuador as well as prolific solo and collective exhibitions. In 2019, “Los Enigmas del Ser”, a book written and published by Marco Antonio Rodriguez about her life and art explains and showcases her most important art work over her entire career.

She has shown in several annual conference galleries for the International Association for the Study of Dreams (IASD) and has published articles in The Lucid Dream Exchange. The spring-summer 2016 issue of Quadrant, journal of the New York Jung Foundation, included a sequential series of Lindberg’s art work in the article co-authored by sister Ava Lindberg, using an evolving development of dream motifs in a collaborative alchemical dream work process for inner knowing and healing called Which Craft.

Currently, Carole owns the Lindberg Gallery/Taller in San Roque in the historic center of Quito, an expansive gallery-studio space in a beautiful restored and mysterious 175-year-old historic house where she gives private tours of her permanent exhibit of drawings, paintings, etchings, digitally mediated photomontage, and three-dimensional assemblage.

Lindberg graduated with a BFA in printmaking with honors from the Rhode Island School of Design.

She is an avid horticulturist, and collected orchid specimens for research at 400m altitude region east of the Andes in the upper Amazon Basin where she lived for many years along the Rio Napo. As one of many botanical illustrators, she documented these same orchids for the massive volumes of Icones Plantarum Tropicarum pubished by The Marie Selby Botanical Gardens in Sarasota, Fla and later, The Missouri Botanical Garden Press. With other botanical illustrators, she produced pen and ink drawings for the six volumes of orchid reference books Native Ecuadorean Orchids by Calaway H. Dodson.

Recently, she has been creating intaglio etchings on zinc plates at her San Roque gallery/studio and at the Estamperia Quiteña in the Museum of Contemporary Art in Quito.